It’s been a rainy week in Georgia, and the rain has foiled our plans. 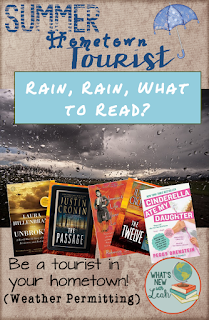 On Saturday (Happy July 4!) we were supposed to visit the historic Marietta Square for a parade, antiquing, and fireworks. But it was a no-go (thank you, rain). We’re going to go there this Thursday, weather permitting.

We did grill (under an awning), and I had a chance to start a new book. I’ve had it on my list for a while, and I finally got to it.

True, Unbroken has been out for quite some time, and most people have probably at least seen the movie (I wanted to read the book first), but I’ve been insanely busy lately. So far, so good. Our protagonist is quite the character–drinking at 8, stealing pies when older, and rough-housing always.

As a soldier in WWII, he is captured by the Japanese and subjected to innumerable horrors.

I’m looking to implement literature circles (if I can find the time) in history. I don’t think the board would approve this one for 10th graders, so I guess I’m just reading this one for myself. It’s a good feeling.

If you’re looking for some good summer reads, here are a few I’ve enjoyed (I won’t mention the Game of Thrones books, but if you enjoy the show, you’ll enjoy the books more):

The Passage and The Twelve, by Justin Cronin
This is a post apocalyptic series about a vampire inducing virus that knocks out a large portion of humanity. I had to read them because Stephen King said, “Cronin puts the scare back in vampires.”

Cinderella Ate my Daughter, by Peggy Orenstein
This is an engaging sociological study of the “girly-girl” culture promoted by our society (through the Disney Corporation’s Princess Franchise). This one, along with The Immortal Life of Henrietta Lacks, I plan to use in sociology literature circles.

Lovers at the Chameleon Club, Paris 1932, by Francine Prose
This novel takes place in Nazi occupied Paris. The backdrop of the story is a nightclub where misfits congregate. Beware of unreliable narrators!

To Marry an English Lord, by Gail MacColl and Carol Wallace
If Downton Abbey is a guilty pleasure of yours, this is a must read. This book is about the early 20th century fashion of American heiresses marrying impoverished English lords. Money for title.

Exit the Actress, by Priya Parmar
This is a novel about the Restoration England actress, Nell Gwynn. Gwynn was also mistress to the Merry Monarch, Charles II. It’s a fun and informative read.

What are you reading this summer? Leave a comment below to let me know! And check back next Monday for more Hometown Tourist Adventures (weather permitting).